“Michael Jordan at his peak as a pro started every practice with a chest-pass – the most fundamental movement in basketball. ” –  Tim Grover (Jordan’s trainer) You can easily find similar quotes about almost any high-level top performers.  They keep working on the very fundamentals of the sport. Do you have a grasp  of … read more!

We’ve updated the Better Track Maps page. Bahrain International Circuit, and the KF1 Karting track in Singapore are the latest additions. These track maps include lots of detail, and remain very printer & note-taking friendly with lots of white space. Navigate over to the Track Maps page for other versions of the tracks. That includes both … read more!

Mikko Laine was an amazing guest to have, and also a guest of circumstance as he was simply on a holiday in Asia so we met up and sat down at the KF1 Karting Circuit in Singapore. As this was a bit of spur of the moment podcast, we didn’t have any defined structure or prepared questions to have a chat about rental karting, race karting, simulators, onboard cameras being allowed at race events, and even floorball.

Mikko has a huge amount of experience in karting having competed in the sport since his teenage years, with his competitive career culminating with his win at the Rotax Grand Finals in 2014 in the DD2 Masters category, and 3rd at the IAME finals in the same year. He’s also a gun at the sport of Floorball having won the Finnish Championship three times in a row in the Masters age group.

Having printed track maps when you head to a race track is incredibly useful. It’s a great way to write down notes after each session, and it can also help you prepare before heading out on track. Use them to write down your braking points, gears used, and any other critical notes. Most track maps … read more! 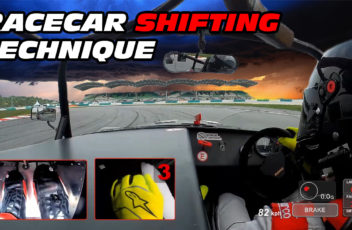 I took the opportunity during a race to talk a bit about shifting technique. The purpose of heel & toe when downshifting is to match the revs of the engine and drivetrain to the speed of the driven wheels. Without heel & toe you rely on the synchromesh to do the work for you – … read more!